When the Antiques Have to Go 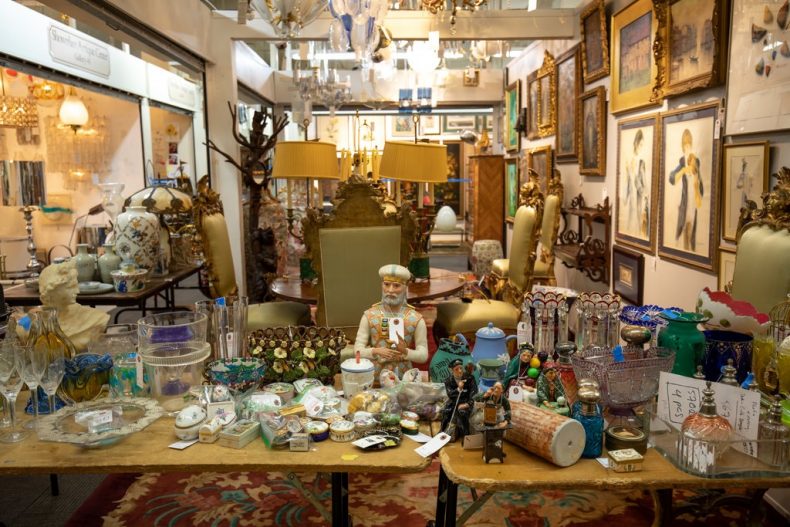 When the Antiques Have to Go

When To Sell Your Antiques?

The owners of the 2,000-square-foot loft in Chelsea loved antiques, and had furnished the apartment accordingly. There was a china cabinet topped with carved scrollwork and a grandfather clock standing sentry near the door. Persian rugs padded the floor.

And it was all getting in the way of a sale.

“It was filled very beautifully with antiques that were quite expensive and precious, but did not fit with what you consider a Chelsea loft,” said Charlie Miller, a Corcoran agent who represented the owners with his colleague Laurie Lewis. “It didn’t fit with the type of buyer who’d be looking at the space.”

The owners were resistant to removing the furniture, and the brokers weren’t happy with the initial level of interest in the condo.

So they took photos of the rooms and used staging technology to give the apartment a different look. The first photo in the listing became a rendering of the living room, a grand space with a wall of windows. “We virtually emptied it, we whitewashed the walls. We put a modern sensibility in,” Ms. Lewis said. “It sold within a matter of weeks.”

At a time when home design television shows and shelter magazines emphasize light colors and pared-down interiors, it can be harder to sell homes that are furnished with antiques. Large pieces in particular can make a property feel smaller than it is or hide desirable features.

Deborah Ribner, a Warburg agent, recently represented a 2,800-square-foot apartment in Sutton Place that was part of an estate. The late owner had loved antiques: Sixteen chandeliers hung from the ceilings; the dining room table sat 12 and had a thronelike chair at one end. “The apartment had the most spectacular views from every single room,” Ms. Ribner said. “But it was so full that it was hard to appreciate them.” She helped the owner’s daughter clear out the antiques, and the co-op received multiple offers and was in contract within five weeks.

More significantly, in an age when so-called brown furniture is far out of favor, antiques can make a property feel dated and less appealing to buyers — especially younger ones. That can mean delicate conversations between antiques owners and real estate agents, who have to resort to explaining, cajoling, and creative solutions like virtual staging to make homes more marketable.

“If they’re a business person I tell them that what I’m selling is space,” said Robin Kencel, a broker with Compass in Greenwich, Conn. “If I’m working with a seller who is more emotional about their furnishings, I tread more gingerly. I’ll pull up photographs from magazines or Restoration Hardware, because that’s a common source if the buyer is between 35 and 45.”

Heirlooms, On the House

The problem is compounded by the fact that most antique furniture has dramatically dropped in value over the past couple of decades. Selling a 19th-century credenza you love for twice the original price is one thing; begging for offers on Craigslist quite another.

William and Mary-Claire Barton inherited some antique furniture from their families, and in the 1980s started collecting it as an investment. “I convinced Bill,” said Ms. Barton, 70, formerly the owner and director of the Hoorn-Ashby Gallery in Nantucket and New York. “By the time we sell these things when we’re old, they’re going to have gone up so much in value. Guess what? They have not.”

That has presented a painful challenge as the couple downsizes from their three-bedroom apartment in the Musician’s Building at 50 West 67th Street to a smaller space nearby. “The fact that we’re getting pennies on the dollar when we go to sell them — that’s no fun,” said Mr. Barton, a Corcoran agent.

The couple called a well-known auction house to assess a George V game table and chairs they bought for $10,000 back in 2006. “He said, ‘I love this and everyone will love this.’” Ms. Barton said. But it would likely sell for only $1,200.

Their building dates to 1919, and the Bartons hoped that a buyer with a traditional bent might want to keep some of their furnishings. Several European shoppers did appreciate the décor, but it didn’t solve their problem: “We had three different viewers who had family antiques,” Ms. Barton said. “They needed ours to go so they could fit theirs.”

The Bartons’ children would like to take some pieces and they’ve reached out to estate buyers, but the prices they offered were too low to make selling worthwhile. They’ve even contacted the city to ask if they could donate furniture to homeless people getting back on their feet.

“Brown doesn’t sell,” declared Amos Balaish, owner of New York Estate Buyers and Showplace Antique + Design Center in Chelsea. He added that there used to be a strong market for antiques “down South, but they’re not even buying it anymore. It’s sort of sad.”

He and his employees have a lot of difficult conversations with potential clients who are looking to sell their furnishings. Andrea Baker, manager of Showplace, said the rug market was down 90 percent.

“There’s the fashion element where things do cycle through periodically, but there’s another trajectory, which is life becoming increasingly less formal,” she said. “For the last 300 years it’s been in a downward trend.”

That doesn’t mean, though, that owners of antiques need to book a dumpster delivery. First, Dennis Harrington, head of Sotheby’s English and European Furniture Department in New York, said that the market for brown furniture seemed to have bottomed out. “It’s too early to talk about a comeback, but we’ve had a slight increase in interest over the last two years,” he said.

The first thing a seller should do is start weeding out antiques as soon as possible: “I would say as soon as you’re thinking about putting the property on the market, it’s not too soon,” Ms. Kencel said.

Decide what you want to part with, and find out which things relatives will take. She likes to use a sticker method, placing different colors on pieces that will be donated or sold. If the process is truly overwhelming, it can be worthwhile to bring in an organizer, decorator or appraiser who’s willing to be paid by the hour to assist.

If you suspect you might have something valuable, contact one of the top auction houses. “You shouldn’t be intimidated by the brand and the name,” Mr. Harrington said. If they’re not interested, they will refer you to other sources. If they are, they will ask for photographs and any paperwork you may have, to get a sense of the value of a piece. So will estate buyers, though Mr. Balaish said that wider shots of the home were more useful, because what you might consider most valuable might not actually be.

One recent client wanted to sell two 19th-century chairs that had originally cost her $12,000. “The current market for them is $1,000,” Mr. Balaish said. “But she had these plastic lamps that she bought for almost nothing. They’re midcentury — we can pay her more for that.”

Adam Blackman, co-owner of the Los Angeles furniture gallery Blackman Cruz, which deals in new and old furniture, points out that there are many regional and local auction houses that sell furnishings — and that sellers needn’t be discouraged if their belongings are rejected. “Go down the list,” he said. For 20th-century pieces he would contact Wright auctions in Chicago. Bonhams, which has offices in a number of U.S. cities, takes finer items. Abell Auction Company in Los Angeles is a good final stop, he said, with weekly auctions.

It helps to keep in mind what kinds of pieces are easier to sell. Smaller, more versatile items like side tables and compact desks are more likely to find a home, Ms. Baker said. Mr. Harrington said that the supply of antique dining tables far outstripped the demand, but that flip-up or expandable versions had some appeal — unlike big roll-top desks and slant-front cabinets.

“People don’t read or write the way they used to,” he said.

Despite the popularity of Ikea and West Elm and the shuttering of antiques shops from New York to California, not everyone eschews older pieces. Nor should they.

“Charles and Ray Eames, they had stuff from their travels but they also had antiques,” said Mr. Blackman. “You want the layers, you want the depth, you want the contrast.”

When used thoughtfully, antiques can give a home more richness and comfort. After the interior designer Christina Murphy’s parents died a few years ago, she had to empty and sell their two traditionally furnished homes, one in Florida and another in Maine. She relied on an estate liquidator in Florida; the Maine house sold furnished, but the buyers let Ms. Murphy cherry-pick pieces to keep for her own home in Manhattan.

“I kept thinking to myself would I buy this if I saw it in an antiques store?” Ms. Murphy said. “If the answer was no, I didn’t keep it.”

She put a large round table with an elaborately carved base and gold leafing in her mostly white living room, an approach that Darryl Carter, who has an eponymous shop and interior decorating business in Washington, D.C., supports.

“The envelope is the critical thing,” he said. “Antiques can present as a very modern vernacular if they’re in a white space.”

Proportion is also important, according to Ms. Murphy. To keep a room feeling young and fresh, she advised keeping antiques to less than 25 percent of the furniture. “It definitely can’t start inching toward the 50,” she said. “But it’s so case by case. Art deco looks so modern. But one bad Victorian thing can ruin a whole view. Then you have to go to like 3 percent.”

Give a monumental piece plenty of breathing room, Mr. Carter said. And consider color carefully. Ebonized wood can look very modern, Ms. Murphy observed, and is easier to slot into a space. “When the browns go to a really reddy tone that gets a lot harder,” she said.

One solution: paint it. “Especially if we’re not dealing with the precious antiques, sometimes it can really be elevated with a coat of paint,” Mr. Carter said. “The other thing is, if you put white leather on an antique chair, suddenly it’s quite modern.”

Making It Ours Again

Kim Schmidt, an art dealer, and Andre Wlodar, vice-president of newsprint at Cellmark, have traveled extensively, gathering apothecary bottles, candelabra and centuries-old cherubim everywhere from Krakow to Guadalajara. The objets filled their apartment; they even had special lighting installed.

But when they decided to downsize from their Upper West Side three-bedroom a year ago, their agent, Ann Cutbill Lenane, of Douglas Elliman, was firm.

“The standard model they tell you — and they’re probably right — was we had to remove at least 25 to 30 percent of our personal furnishings,” Mr. Wlodar said. They removed books and edgier art, and made many trips to Housing Works. Ms. Lenane made them paint the walls white.

“That. Was. Hard,” Ms. Schmidt said. Added Mr. Wlodar: “From that moment, I started to feel like it was no longer our apartment, and that hurt.”

They moved into their new place in July. It’s smaller and more modern, with tons of light. The couple are happy with the change. “It’s a good thing to be thoughtful about your things,” Ms. Schmidt said. It helps that they have a house in upstate New York that they’re planning to expand.

“We are already figuring out where things are going to go,” Mr. Wlodar said.